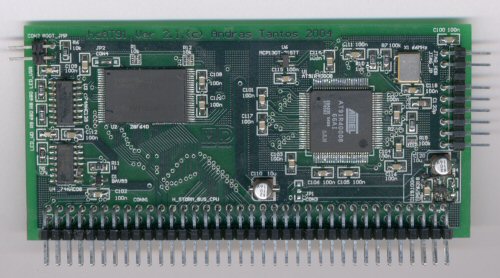 This CPU card is built around the ATMEL AT91R40008 microcontroller. That device integrates a 66MHz ARM7TDMI processor core with 256kBytes of on-chip SRAM and a wide set of peripherials. The processor employs a 32-bit internal and a 16-bit external bus architecture.

The CPU card combines this microcontroller with a sizable 16-bit FLASH ROM of up to 8MByte in size, and some support circuitry.

The exceptionally low power-consumption of the ARM processor architecture is even further reduced by the 1.8V core power voltage. This power can be produced on-board by a small LDO regulator or provided externally.

The processor can be programmed in a variety of languages using the GNU toolchain, like C/C++ Pascal or ADA. There are also several other commercial development tools available from many vendors.

The CPU on the module is the AT91R40008 from Atmel. This microcontroller contains a powerfull 66MHz, 32-bit ARM7TDMI microprocessor, 256kBytes of zero wait-state SRAM memory with a slew of peripherials:

For details, please see the datasheet of the processor at the ATMEL website.

Though the processor employs a 32-bit internal architecture it has only a 16-bit external bus-interface. This interface is used in the hcAT91 CPU card to communicate with the on-board FLASH memory and the other H-Storm devices connected to the H-Storm system bus.

Since the CPU boots from FLASH memory, all the interrupt vectors are hard-coded in the FLASH. That would prevent user-code to install its own interrupt vectors. To solve this issue, the CPU supports two alternative memory-layouts, switchable through a ‘REMAP’ command. After this command, the address space around address 0 is mapped to internal SRAM and thus interrupt vectors can be modified. Normally user applications run in this ‘canceled REMAP’ mode, and at least partitially from internal SRAM.

The hcAT91 card can accomodate various sizes of FLASH memories from 1 megabit to 64 megabit. Currently a 16 megabit device is standard on the card, giving 2MBytes of storage space.

Upon reset the CPU starts execution at the address 0 of the FLASH memory (unless the card switched to programming mode) so a bottom-boot-block FLASH device was selected.

The memory width of the FLASH memory is 16-bits and the device supports 3V only operation, so programming and erasing the FLASH content can be done by software.

The FLASH device can be programmed using only software means. To prevent accidental overwrite or erase of the FLASH content however various safety locks are incorporated into the memory. One of these safety locks prevents FLASH programming code to be executed from FLASH as a side-effect. This means that any application that modifies FLASH content has to be at least partially executed from SRAM.

The card supports 8- and 16-bit normal read and write operations. DMA is not supported. Three external address spaces are available (through nSEL0…nSEL2) with highly flexible timing setup. Interface timing can indipendently set for each address space. External wait-state generation is supported. The PROG signal turnes the card into a special programming mode, when after reset it boots from a memory connected to the nSEL0 line instead of the on-board FLASH.

Three external interrupt lines are supported with both edge and level triggering. The nIRQ0 signal is connected to the CPUs FIQ interrupt and thus have shorter latency than the other two signals.

The plug-and-play bus is implemented with two GPIO signals of the CPU.

The serial ports are connected to IO group A and B, however they use only four of the available six pins. Both the transmit and the receive clock signals are connected to the same pin of the CPU. Please refer to the schematic or the datasheet for additional information. IMPORTANT! The TXD1 line (pin56) doubles as a tri-state enable signal upon hardware reset. This pin has an internal 10k pull-up resistor however make sure not to drive this pin to low when the nRESET signal is active. If this pin is low while the device is reset, all pins of the CPU will be tri-stated and the device will not boot.

A reset generator IC is mounted on the board. It ensures proper initialization of the CPU and also generates power-on-reset on the nRESET pin of the H-Storm bus.

A optional on-board regulator provides the required 1.8V core power for the CPU. This power is derived from the standard 3.3V power supply that drives all the rest of the components of the system. When this power supply is implemented, the CPU card can operate in a single 3.3V-volt supply environment, with a slightly higher power consumption. When the power supply components are not populated, the CPU card requires two power lines but the power consumption is optimal.

Though the CPU card was designed to be operated in an H-Storm compatible system, it can operate in other environments as well. If the restrictions on pin-funcitonality of the H-Storm connector is lifted some interesting operating modes can be used.

With all these, the maximum number of I/O lines available on the module can be increased to 27. Note however, that some of these lines contain internal pull-up resistors so consult the schematic of the module before using these pins in this alternate mode.

The hcAT91 cpu card supports the embedded in-circuit emulator module in the CPU. This emulation module uses the JTAG interface. All of its signals are connected to a standard H-Storm in-circuit emulator connector. A cheap emulator HW, like the Wiggler in conjunction with GDB can be used to download and debug programs on the HW.

The CPU consumes in the range of 55mW under normal operating circumstances. In a single-supply scennario that would lead to an around 100mW total power consumption or about 33mA of supply current. When idleing the power requirement drops to around 1/10th of the operating current that is, to 3mA.