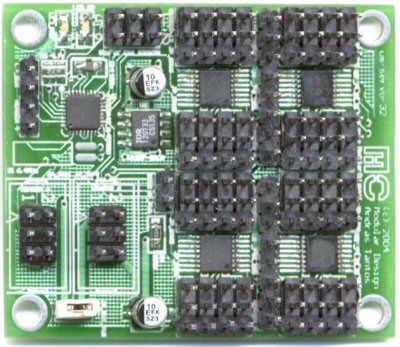 This µModule implements a 32-channel R/C servo controller. The module interfaces to the external world using the TWI interface that’s common among all µModules. It also has an optional CMOS-level RS-232 interface option. The module is ideal for biped (humanoid) or hexapod robot control applications where a large number of servos have to be controlled. For even higher number of servos multiple servo controllers can be connected to the same TWI channel. With this feature hundreds of servos can be controlled by a single central controller.

The TWI bus interface follows the µModule standards. There are six or four-pin connectors on the board, both with identical functionality. Two wires are used for the TWI signal transmission (clock and data) while the rest provide power and ground signals. The interface can be operated at a rate up to 400kHz. This module never initiates any transactions on the bus, it operates in slave-only mode. Status information can be acquired by polling and commands can be sent to the module at any time. The module implements the standard 8-bit register bank µModule communication protocol with 32 8-bit registers, one for each channel.

The module can source and sink power on this interface. The power to and from these sockets can be interrupted by an on-board jumper. With this there are three possible powering configurations with regards to the logic-level functions:

Servos can consume quite a large amount of power when under heavy load (we’ve measured around 0.6A on a standard servo). Since the module can control 32 servos that can add up to a huge amount of power. In order for this power to be delivered to the servos, the power lines for the servo headers are cut into 8 regions, each powering 4 servos. The power pins for the first set of four servos is connected to the power regulator for the digital circuitry on the module. It is therefore important that power to be connected to the connector for the first four servos even if no actual servos are connected to those headers. It is possible to connect one or more set of servo power pins together and provide power through a single wire but care must be taken to the maximum current that can flow through that wire.

Each servo output is a PWM signal, with an approximately 50Hz repetition rate and a pulse width between 0 and 2.5ms. The pulse width is controlled by an 8-bit register so the step-increment in the pulse is around 10us. Most R/C servos require a 1..2ms pulse with, with 1.5ms corresponding to the center position. These values lead to 100 different values that servos can interpret or about 7 bits of usable resolution. The control signal for the servos is a 3.3V-compatible CMOS signal (unless an external 5V power supply is used) which is compatible with 5V TTL input levels that most R/C servos require.

Note that these are approximate values and are not intended to be used as a source of any kind of timing. Our measurements show that for example a Hitec HS-425BB servo requires value 61 for its left-most position and the value 220 for its rightmost position. Exact values and limits differ from servo to servo and must be experimented with for each application.

The current drawn by the circuit is around 7mA when operated from the TWI interface. The optional external RS-232 level shifter consumes an additional 4mA.

The module on the top of the standard TWI interface, that is common among all µModules also contains a (logical level) RS-232 interface. This interface can be used to connect the module to other microcontroller modules or (after level-shifting) to a PC which doesn’t have a TWI interface.

The serial interface is configured to 38400 BAUD, 8 data bits, no parity and 2 stop bits. The communication protocol is very simple.

The channel read without increment command

This command is very similar to the previous one, with the exception that it does not change the channel address after execution. It is initiated by the host with the ‘R’ (dec 82) character to which the servo controller responds with the current value of the addressed channel.

The channel write without increment command

This command behaves the same way as the channel write command with the exception that it does not increment the channel address after execution. It is initiated by the ‘W’ (dec 87) character, followed by the new channel value. Both characters are acknowledged by the host with a ‘*’ response.

The TWI interface adheres to the standard µModule communication protocol. It implements 8-bit register-bank addressing, and defines 32 registers. Each register corresponds to a single channel.